Disaster struck at 2.30 am on Dec 2nd… The night of Dec 1st. It was raining right through the day in Dec 1. We had been to West Mambalam to do my father-in-law’s “devasam” – it was his death anniversary. As we parked the car, we stepped out into water that was ankle deep and then at the place where we did the “Devasam” water started to seep in. It didn’t set off any alarm bells then. We had been in Chennai since Dec 20th and the one thing that was different this time was the presence of police and traffic policemen everywhere helping people and keeping traffic moving. It kept raining on and off so, on Dec 1st too we thought everything would be fine.

We dropped off Nachi and Kousalya in K K Nagar, a couple of kilometers from their home since we saw one of the roads with water just streaming through like a rivulet. On the way to our place at Pallikaranai, I saw my ex-office at Olympia Tech Park completely flooded in and looking like an island. I remarked to Krishnan that the Civic authorities of Chennai have to be commended on their awesome work because in spite of the incessant rains, the roads were navigable and water was draining off.

We reached home around 1.30 in the afternoon and realised there was a power cut. We still didn’t think anything was going to happen. We read till 11.30 pm and the iPad charge went down to 8% and then we decided to sleep. Krishnan was restless for some reason and woke up at 2.30 am to use the loo and saw water seeping in. He woke me up and we quickly woke up mom and took her upstairs. The water started to fill in rapidly…. We scrambled to take some essentials upstairs. The old lady who cleans in the colony came to our place with her family – daughter, son-in-law, grandchildren. Their house/hut was in 4 feet of water !! We told her to go upstairs and asked her son-in-law to help with lifting the gas cylinder and stove upstairs. We then made four or five trips to take up provisions and luckily we had bought a Pure-it non-electric water filter. We took that up and we arranged some of the stuff on the top shelves in the ground floor thinking the water may at best raise to a couple of feet.

Within 30 to 40 minutes, the water levels rose upto knee level inside the house and we quickly shut the door, locked up and went up to the first floor. A bunch of 7 or 8 more people, women and children also came up from the nearby slums. We got them to come inside and change into some dry clothes that they had managed to salvage. Then another set of people came. The fourth set came with a small baby and one of the young men had a piece of glass stuck on his sole as he was trying to ferry people to safer locations on a makeshift raft. There was also a domesticated parrot that sat quietly on a badminton racquet and only spoke when it couldn’t find its friends and became lonely.

The family with the baby had brought some milk and I heated it up for the baby. We managed to put some Vicco Turmeric on the young man’s sole and tied a thick cloth around the wound. I gave him a pair of socks so that he could walk without the bandage coming off.

I handed out half a packet of Britannia rusks that we had brought upstairs and some bananas … It was heartwarming to see the young girl who was the parrot’s owner, feeding the parrot first !! A dog came too but didn’t stay long and left with his owner. I managed to make  tea for the whole group. In the rush to come upstairs we grabbed a couple of old curtains and they came in handy for children to dry themselves and some of them even used them as shawls to sleep in. Our living room and the balcony outside was full of people, and I was getting worried that we wouldn’t have supplies to feed so many people because we had just 1.5 kilos of rice, some curd and a jar of pickle. Anyway we were hoping some solution will open up. We had no issues with people staying on, but didn’t have the means to support and that felt bad.

We kept looking out and saw the water level rise steadily. By 10 am some of the group’s started to dissipate. Their menfolk came in makeshift boats and helped the older, taller womenfolk to wade through water and reach a nearby school and “Chatrams” (wedding halls). 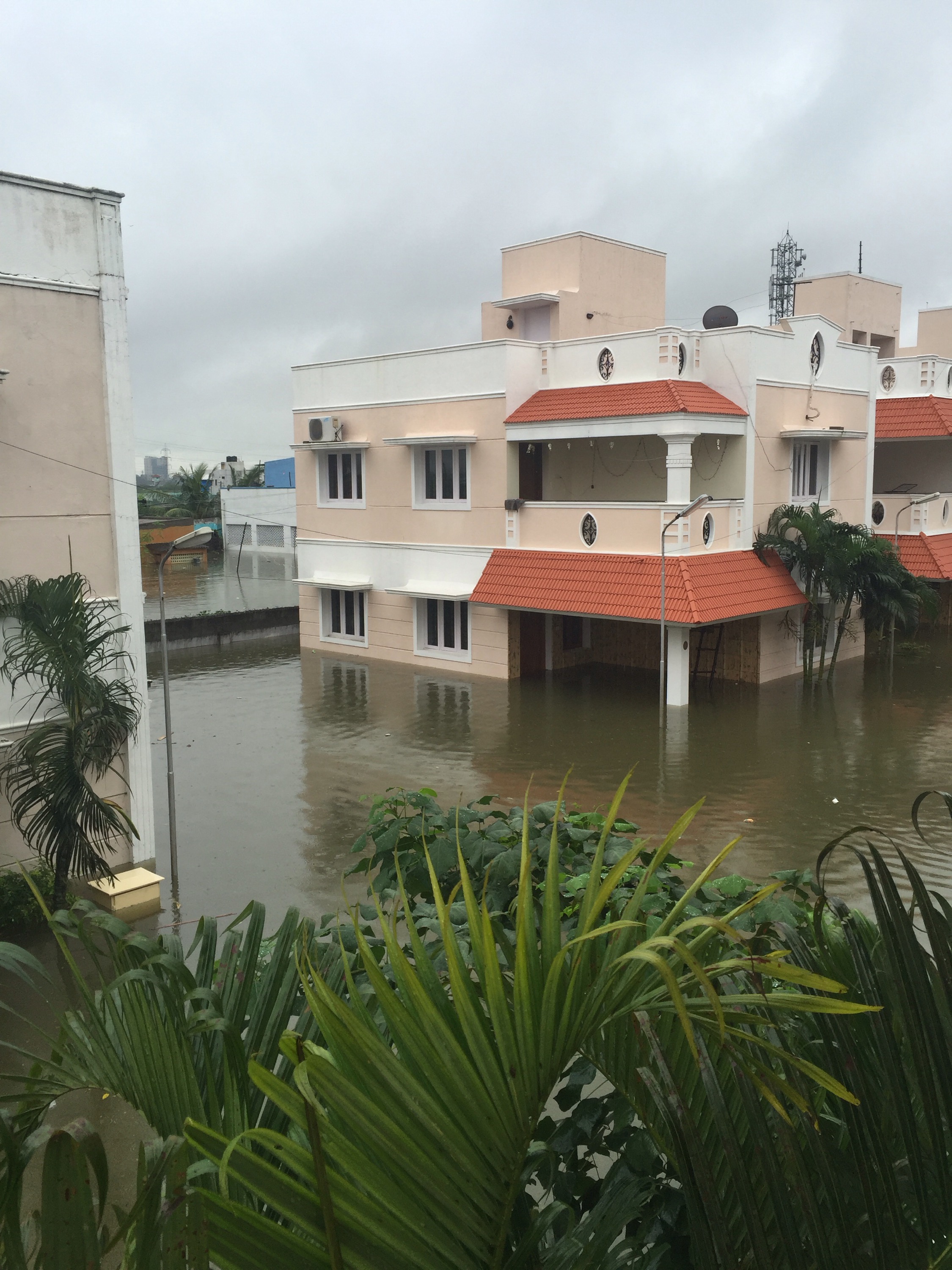 By 11 am just our old lady and her family of five people were left. I cooked rice for them and gave them half the pickle that I managed to salvage and some curds. Then the rains gave a bit of a break and they were able to dry out a small portion of the balcony to just sit. By this time water had risen nearly 6 feet and the cars everywhere were submerged. We also realised that some reservoir had been drained of excess water and that had caused the flooding. We slept a little and then just conserved power in all our phones by putting them on airplane mode since there was sporadic connectivity.

I managed to get through to a cousin of mine to let him know we are safe and asked him to inform my aunt who stays in Jamin Pallavaram, where we are today. She is a veteran of three floods but was worried sick about us. We again made some rice around 3.30 pm for the old lady’s family and us, and then the old lady and her family left for the “chatram” around 5 pm before it got dark.

We just used the “Good Knight” fast card to ward off the mosquitos and slept fitfully. We kept waking up every few hours to see how far the Suzuki Alto car in the house opposite ours had submerged .. Our way of figuring out if the water levels were rising.

My mom and I were flooded in for the first time in our lives…. Krishnan has experienced it before and anyway he had seen this in his dreams. A dream come true 😦 but one am sure he never wanted to come true.

A journey to find new meaning after personal loss